The D.O.M.E. Cycle Lab will be hosting first of many open lab workshops. The first will be held between 11am-2pm on Saturday, August 13th, 2011 at the D.O.M.E. shop located at 4033 Arizona Ave. Los Alamos.
Bring in your own repairs and use the facilities, tools, solvents, consultation, etc. You can bring bike stands and some tools if you have them in case of a busy shop. There will be a small service fee for the workshop. The service fee does not include any parts that the repair may warrant. We want to offer education through application to our cycling community. For more information or interest, contact us at: 505-670-5436 or domeshop@comcast.net
Posted by Chrysanthemama at 10:36 AM 1 comment: 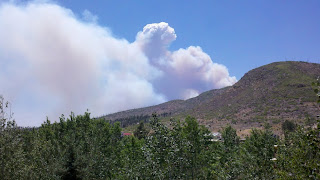 1st plume of smoke seen in Los Alamos.
On Sunday, June 26, 2011, the Las Conchas wildfire began near the Las Conchas climbing area in the Jemez Mountains.  Within 48 hours the wildfire became the largest in New Mexico history, ballooning even larger than the previous record-holder, the Cerro Grande Fire, in only a day.

The forest conditions at the time of the fire were ripe for disaster.  There had been minimal snowfall during the winter, and no spring rains to speak of.  June was an erratic combination of unusually blustery winds combined with scorching heat, and a few days of unusually cold and windy conditions.  The National Forest Service had initiated Stage III fire restrictions on June 24th, but unfortunately, wind caused an aspen to fall on a power line, and the fire went chaotically out of control within minutes. Considered to be human-caused, because humans built the power line, this tragic fire seems an unfortunate act of fate. 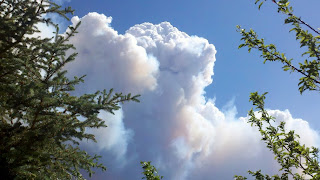 The plume in the early evening of June 26th.
By early evening, it was evident that this fire was wreaking havoc in the mountains where many Los Alamos locals  love to recreate.  The gusto of the DOME Free-Ride Alliance to get out and ride the trails prior to the forest closures didn't portend the disaster that was to come.  Our motivation to ride the majestic and beautiful trails near Cochiti Mesa came only from a disappointment to not be able to ride them during the forest closure and before the monsoons opened the trails back up.  Little did we know that the trails would be severely impacted and altered for the rest of our lifetime. 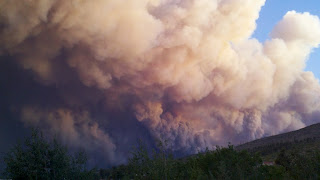 The amazing smoke column as seen from Arizona Ave. @ 7:13pm 6/26/2011
To add even more tragedy to the loss of the beauty, the impact to wildlife, and the impacts to the land, the fire destroyed the homes of the Cochiti Mesa residents, including that of a DOME Free-Ride Alliance rider. 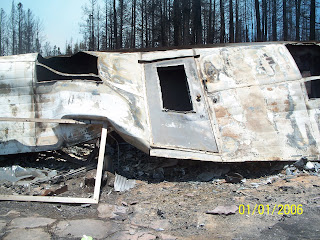 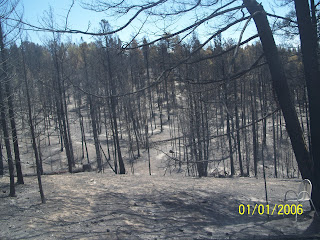 The view from this destroyed home had been idyllic...endless views of trees and the green of the forest floor.  (Ignore the incorrect date stamp.) But the view had turned to the uncomfortably familiar sight of burnt trees and ashen forest floor. 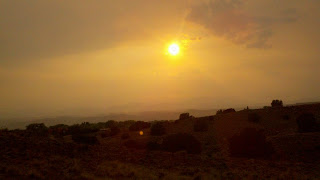 View of the Jemez  from El Rancho on June28th.
As heartbreaking as these large wildfires are, life continues onward. The initial priorities include erosion mitigation, clearing downed logs, rehabilitating the trails that are initially repairable, and rerouting those that have endured more damage. Slowly and in time, regrowth happens, and small changes become larger and more noticeable. Those of us living in these times will never see these portions of our forest look the way it once did, but the experience of Cerro Grande shows us the progression that occurs over time--or at least 11 years.

The  Pajarito Ski Area, considered the green forested haven after the Cerro Grande Fire, also took some direct hits from the Las Conchas Fire, but amazingly, a significant portion  of the mountain is still okay.  Neal Pederson, who has long spearheaded the development of the biking and free-ride trails at Pajarito, recently surveyed the trail damage on the mountain. 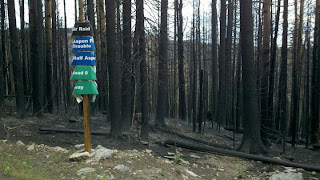 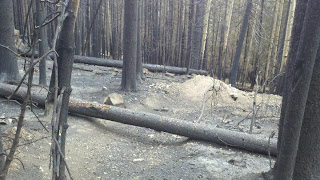 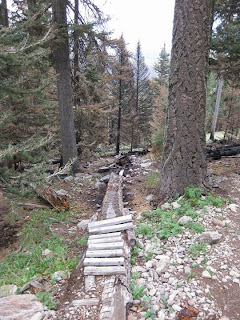 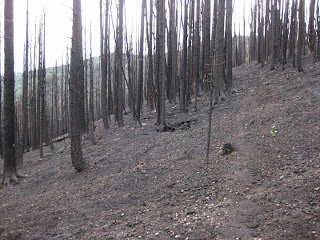 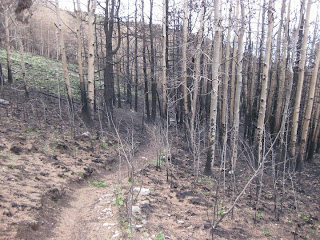 Half Aspen, in the Aspens.  Photo by Neal Pederson. 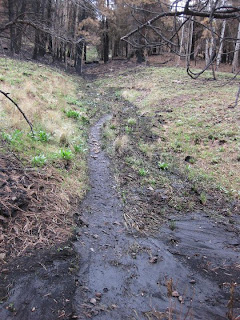 Bottom of Half Aspen.  Photo by Neal Pederson.
Many of the bike trails have been affected by the fire.  Some impact is minor and some is severe.  Neal is organizing trail work parties for the restoration of the Pajarito bike trails and is hoping to have a large work party on Saturday August 6.  Anyone interested in helping out can contact Neal through the Tuff Riders mail list, and we will try to post some work party updates on this blog.
Other important mountain bike trails that were impacted by the fire include the Canada Bonito Trail that head up to Pipeline and to Guaje Canyon.  Guaje Canyon trails and the Guaje Ridge Trails were hit hard up at the top, in the previously unburned areas. 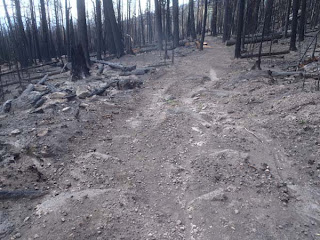 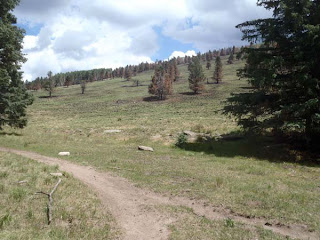 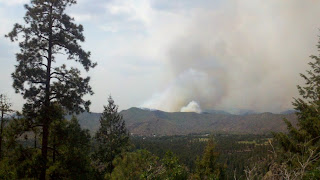 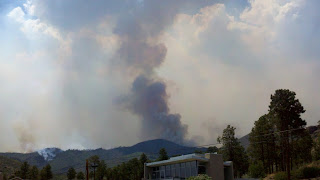 Portions of the Jemez part of the Santa Fe National Forest will re-open on Saturday July 30th. As we can get out and conduct more surveys of the trail damage, we will provide updates and photos.

In the mean time, if you need bike service or repair, don't hesitate to make an appointment!  Stay tuned for some further announcements of August Cycle Lab specials, as well as Open Lab days where you can come in and use our equipment to tune-up your bike.

As always, the DOME is here to keep your ride in pristine condition. 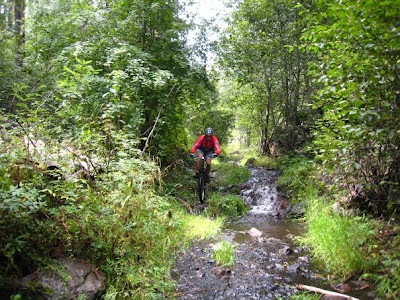 Despite the recent high winds, warmer weather has been steadily increasing the past several weeks. The DOME staff recently took a field trip to Indian Creek, UT, but we are back and ready to service your bicycles.

We are thinking of running some Spring Cleaning Specials, so stay tuned for further details.

The Diamond Drive construction has started up again, so be extra cautious through the work zones, and try to stick to the trails and back streets as much as possible.

As always, we can order most parts and have them to you in two days.

Give us a call, send an email, or send a text to inquire about our services.

Happy Trails!
Posted by The DOME Cycle Lab at 12:32 PM No comments: 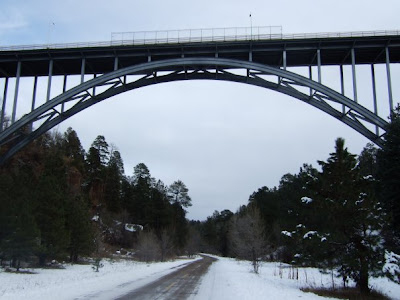 The DOME Cycle Lab would like to remind all you strong and burly winter bike commuters to maintain your ride during the winter season.

All that salt, sand, and grit seems to be taking a toll on cables, chains, and housing.

Keep Riding!
Posted by The DOME Cycle Lab at 2:50 PM No comments: 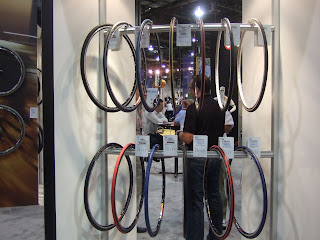 The snow has finally stopped blowing horizontally and it looks like spring may actually be here to for a while.

The leaves are beginning to populate the sides of the mountains, race season has begun for many, the roads may still be sandy (although hopefully the sweepers will help out soon), and the trails are getting tacky.

If you haven't already done so, DOME suggests doing a spring cleaning checkup on your bicycle.

Is your chain stretched out?
Cables frayed?
Housing falling apart?
Do the brakes still have integrity?

Spring is a great time to bring your bike into the shop for a spring safety check and to ensure that your bike is in optimum condition for spring training.
Discounts are offered to all verified members of the Triatomics and the Tuff Riders.

We are appointment only: 670.5346
Questions can also be emailed: domeshop at comcast.net. 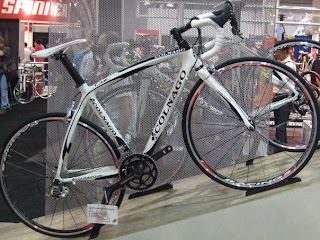 The DOME Cycle Lab is offering a pre-season tune-up special.

Bring in one bicycle for a tune-up and get a second tune at half price.
Discount applies to the Tune-up price only.

The DOME is an appointment-only service shop, so please call to ensure your slot!

If you prefer to communicate electronically via email, the proper channel would be:
domeshop (at) comcast.net

Happy Trails!
Posted by The DOME Cycle Lab at 5:07 PM No comments:

Welcome to the DOME Cycle Lab 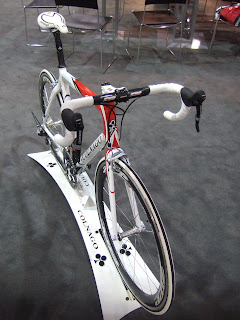 The DOME is a Bicycle Service Shop and Information Center that has been serving Los Alamos Cyclists since 1997.
The DOME is an appointment-only bicycle studio located in Los Alamos.
The expert mechanic--Scott Beguin--is absolutely interested in making sure your bike is up and running smoothly, and all work is guaranteed.
While Mr. Beguin's outside interests include climbing ice mostly, as well as rock, he definitely takes his mechanics seriously. He wants nothing more than to ensure that your bike is is as quiet, smooth, and in perfect operating condition as possible.
Welcome to The DOME's new Cycle Lab and Blog--we look forward to communicating news and information related to our cycling community!!